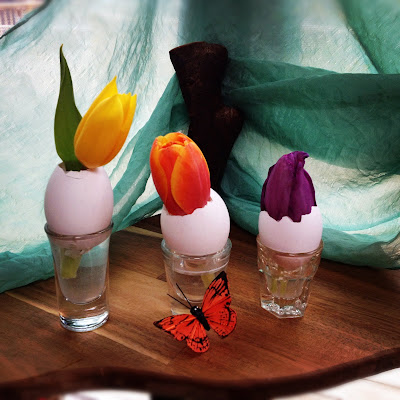 (It is very simple to make these little Easter Egg Vases… Poke a hole at one end of an egg and carefully create an opening at the other end, empty the egg contents and rinse well… cut a flower short but long enough to bring the stem all the way through and find a little glass to fill with water and use as your vase.)

Once upon a time there was a good old woman who lived in a little house. She had in her garden a bed of beautiful striped tulips.

One night she was wakened by the sounds of sweet singing and of babies laughing. She looked out at the window. The sounds seemed to come from the tulip bed, but she could see nothing.

The next morning she walked among her flowers, but there were no signs of any one having been there the night before.

On the following night she was again wakened by sweet singing and babies laughing. She rose and stole softly through her garden. The moon was shining brightly on the tulip bed, and the flowers were swaying to and fro. The old woman looked closely and she saw, standing by each tulip, a little Fairy mother who was crooning and rocking the flower like a cradle, while in each tulip-cup lay a little Fairy baby laughing and playing.

The good old woman stole quietly back to her house, and from that time on she never picked a tulip, nor did she allow her neighbors to touch the flowers.

The tulips grew daily brighter in color and larger in size, and they gave out a delicious perfume like that of roses. They began, too, to bloom all the year round. And every night the little Fairy mothers caressed their babies and rocked them to sleep in the flower-cups.

The day came when the good old woman died, and the tulip-bed was torn up by folks who did not know about the Fairies, and parsley was planted there instead of the flowers. But the parsley withered, and so did all the other plants in the garden, and from that time nothing would grow there.

But the good old woman’s grave grew beautiful, for the Fairies sang above it, and kept it green; while on the grave and all around it there sprang up tulips, daffodils, and violets, and other lovely flowers of spring.