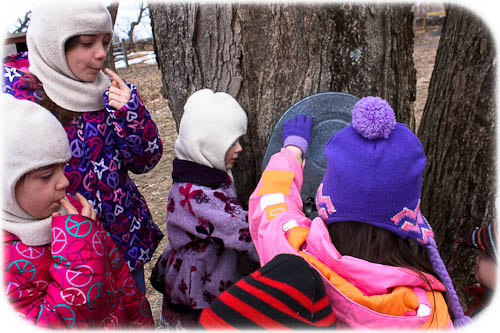 We took a little field trip one Saturday afternoon with some friends to a maple syrup farm.  The event was free and very simple but it was cool to show the children how maple syrup is made and how much work goes into the process.  We were absolutely FREEZING and were very thankful for our woolens this particular day.  Connecticut is such a beautiful place to live but the winters can get very cold and it is important for us to remember to dress our children in layers because of the unexpected shifts we’ve been seeing in temperatures. 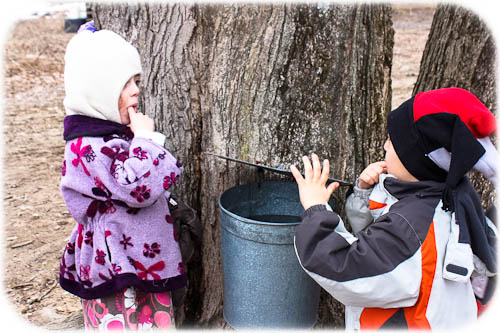 The trees had their buckets attached and were slowly dripping out the magical liquid from deep inside.  I kept thinking that there must be some sort of beautiful tale to be told about maple syruping… little busy gnomes in trees tapping away and guiding the flow of syrup. 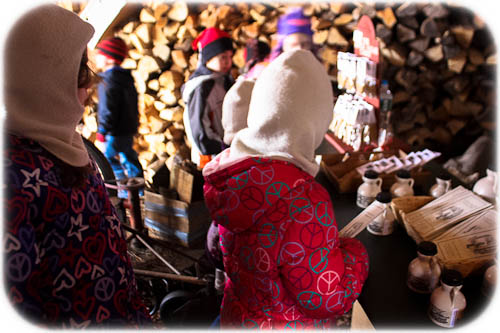 Inside there was delicious maple candy and a man who was demonstrating how the evaporator worked and how the liquid was boiled down into syrup.  It is a very time consuming process but I love it so much.  I wanted to go right home and tap my own maple trees but soon realized that I’d need a little more prep time to do it right.  So, I hope to identify the correct trees and buy the supplies needed to tap syrup next year at Little Acorn.  I think the children will love it and it could be a really beautiful way to welcome spring.
As you can imagine, Native American Indians were the first maple syrup producers and I came across this beautiful old fable which has a moral that suits people in our day and age of over-consumption as well.  I hope you enjoy it:
An Abenaki Legend
Long ago, the Creator made and gave many gifts to man to help him during his life. The Creator made the lives of the Abenaki People very good, with plenty of food to gather, grow, and hunt. The Maple tree at that time was one of these very wonderful and special gifts from the Creator. The sap was as thick and sweet as honey. All you had to do was to break the end off of a branch and the syrup would flow out.
In these days Gluskabe would go from native village to village to keep an eye on the People for the Creator. One day Gluskabe came to an abandoned village. The village was in disrepair, the fields were over-grown, and the fires had gone cold. He wondered what had happened to the People.
He looked around and around, until he heard a strange sound. As he went towards the sound he could tell that it was the sound of many people moaning. The moaning did not sound like people in pain but more like the sound of contentment. As he got closer he saw a large stand of beautiful maple trees. As he got closer still he saw that all the people were lying on their backs under the trees with the end of a branch broken off and dripping maple syrup into their mouths.
The maple syrup had fattened them up so much and made them so lazy that they could barely move. Gluskabe told them to get up and go back to their village to re-kindle the fires and to repair the village. But the people did not listen. They told him that they were content to lie there and to enjoy the maple syrup.
When Gluskabe reported this to the Creator, it was decided that it was again time that man needed another lesson to understand the Creator’s ways. The Creator instructed Gluskabe to fill the maple trees with water. So Gluskabe made a large bucket from birch bark and went to the river to get water. He added water, and added more water until the sap was that like water. Some say he added a measure of water for each day between moons, or nearly 30 times what it was as thick syrup. After a while the People began to get up because the sap was no longer so thick and sweet.
They asked Gluskabe “where has our sweet drink gone?” He told them that this is the way it will be from now on. Gluskabe told them that if they wanted the syrup again that they would have to work hard to get it. The sap would flow sweet only once a year before the new year of spring.
The People were shown that making syrup would take much work. Birch bark buckets would need to be made to collect the sap. Wood would be needed to be gathered to make fires to heat rocks, and the rocks would be needed to be put into the sap to boil the water out to make the thick sweet syrup that they once were so fond of. He also told them that they could get the sap for only a short time each year so that they would remember the error of their ways.

And so it is still to this day, each spring the Abenaki people remember Gluskabe’s lesson in honoring Creator’s gifts and work hard to gather the maple syrup they love so much.