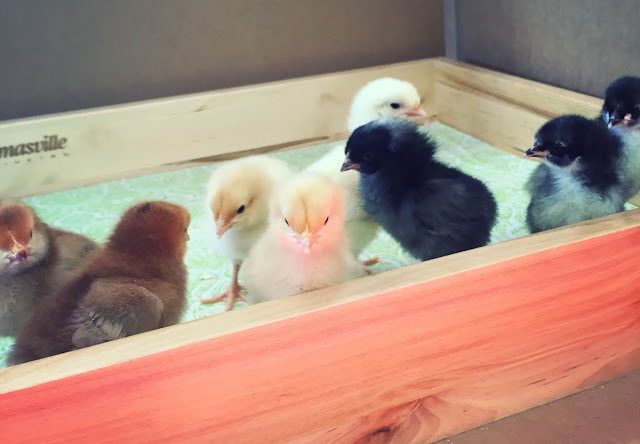 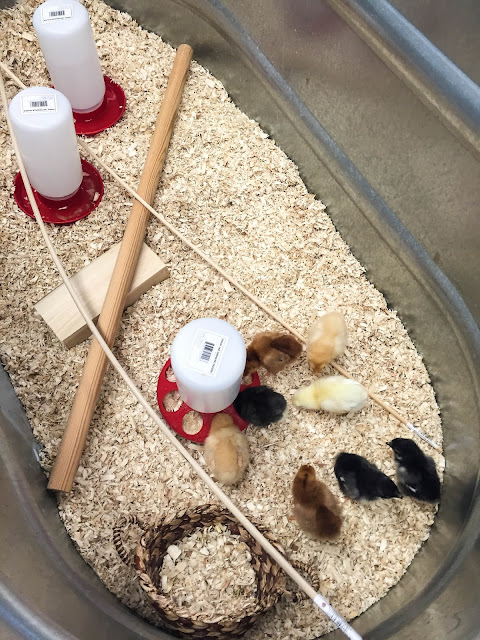 The time has finally come! I’ve wanted chickens for so many years and finally they are here!  I did a lot of research and chose very carefully.  We have eight baby chicks that we ordered from mypetchicken.com along with a beautiful chicken coop that was expensive but will really keep them warm and dry during our very cold winters and is set up with electricity.

It is amazing to me that these babies come to you straight in a box that you pick up from the post office!

Here is the coop. I just love the color and design.  It is Amish made. 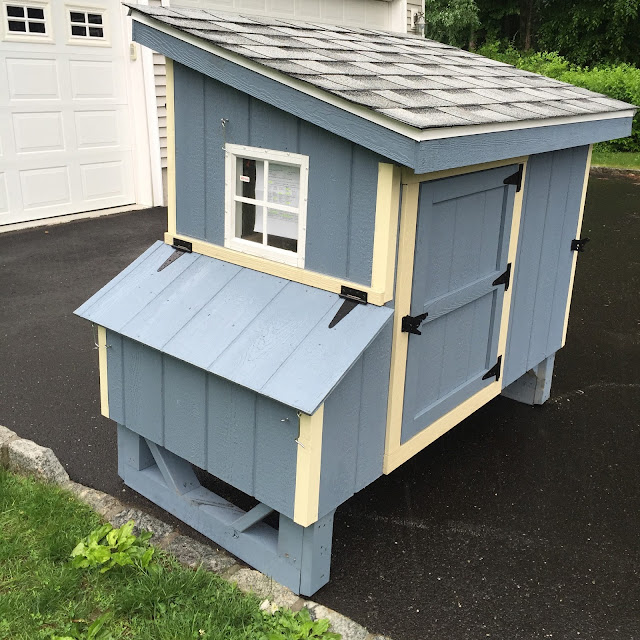 We had to put it on wheels to get it to the back garden. What a job that was!… 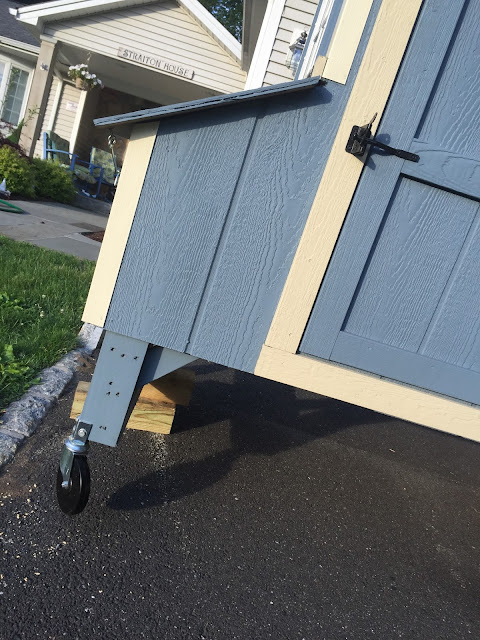 We are putting the coop and building the run behind the playset and next to our garden. We also moved Jellybean’s hutch into the garden itself. I sometimes let her hop around the garden when I am there. She has, however, gotten away on me twice when I wasn’t looking so I am extra careful now and will also be adding another layer of fencing. Building the run and setting up the coop is going to be another huge job. We have to level the land and put hardware cloth under the run so predators don’t dig up and get the chickens. 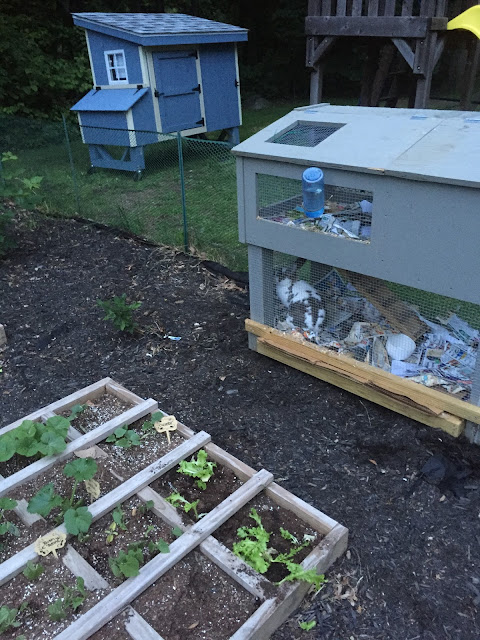 I tried to do a lot of research and choose breeds that are cold hardy for our freezing winters and also lay well. I also chose chickens that tended to make good pets and had more relaxed temperaments.
We chose two Australorps which we have named Laverne and Shirley thanks to a friend’s suggestion on Facebook.  Australorps are excellent layers and produce light brown eggs on an average of 5 eggs per week. They are usually calm and sweet.
These two are Rhode Island Reds.  They lay an average of 5 eggs per week and are great in the cold. We named these Freckles and Sunshine. My cat when I was a little girl was named Sunshine. It was nice that my daughters just so happened to choose that name.
I also chose two Buff Orpingtons which do not lay as well (average 3 eggs per week) but make excellent chicken pets as they are usually very friendly and calm.  They are also good in the winters.  We named these two Pocahontas and Coconut.
This pretty chick is a White Leghorn that has been named Snowball.  They lay very large white eggs and will be the only chicken we have that will give white eggs.  They are sometimes known to be a little nervous and active but we will see because this one right now seems to be the most shy of our babies.
And this… is Noodle.  Maia picked this one out online and named it herself. It is a Dominique chicken and because they are not often chosen they are called to be endangered. It lays about 3 eggs per week and is really beautiful when it gets bigger with black and white specks.
I have tried to explain to the girls that they must try their best not to get too attached to the chickens because it is a reality that we could lose a few to sickness or predators no matter how careful we are.
I even considered not naming them to help with this but that idea didn’t last long.  And, both Maia and Bree have grown very fond of “their” chicken.
The girls just love them so much.  They come running in the door after school begging to go play with the chickens. I’m glad they are showing such an interest as it will help the chickens to get used to being handled.  We have even slowly introduced Caicos to them… 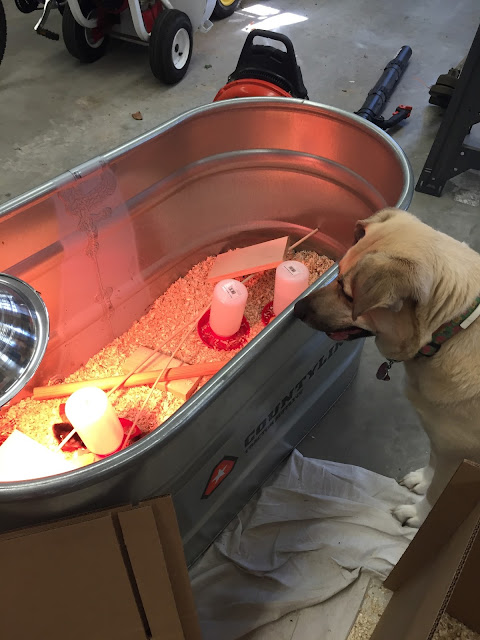 While Caicos is not very good with strange humans that come to our house, she is more tolerant than I’ve ever expected when it comes to bunnies and chickens. I will not trust her alone with them and I did notice she was licking her lips 🙂 but my hope is that while the chickens are safe in their run, she will be able to calmly lay nearby and protect them.
Oh and I’ve found another great use for the chicken coop!  It’s a great place to put wild children in when you need a break 😉 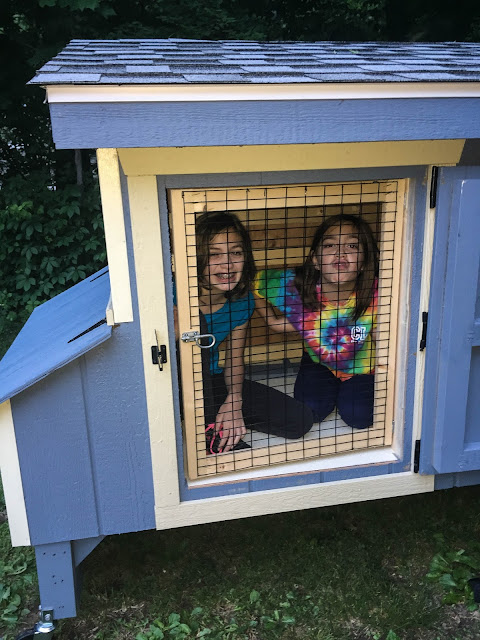