Skip to content
At the turning point of time
The Spirit-light of the world
Entered the stream of earth existence.
Darkness of night
Had ceased its reign;
Day-radiant light
Shone forth in human souls:
Light
That gives warmth
To simple shepherds’ hearts;
Light
That enlightens
The wise heads of kings.

‘The Epiphany’ celebrated on January 6th also goes by other names such as Three Kings’ Day, Twelfth Day, The Adoration of the Magi and Dia de los Tres Reyes among others. In many cultures, Christmas or the birth of Christ is actually celebrated on this day instead of December 25th. January 6th brings the ends of the holy days and twelve days of the Christmas season. It signifies the birth of the Light within us all and the resolution of our waiting and anticipation of the coming of the Sun and/or Son in our lives and in our world (Advent). It is a time of Truth, of Hope and of Finding the Light and ‘Christ’ within all of us.

Twelfth Night is a festival worth celebrating, as it signals the end of the holiday season and can give us a last “hurrah” before emerging out of the magic of the season into to everyday life.

There are so many beautiful ways to celebrate this magical time with your children. Today we are sharing a traditional recipe for Twelfth Night Cake or King’s Cake which is often baked on Epiphany, the “twelfth day of Christmas” (January 6th). Recipes for this famous cake abound, ranging from the typical medieval vagueness (taek ye a measure of flour, and a measure of almonds, mix them together with enough eggs, etc…) to the simple French Galette Des Rois (Three Kings Cake) in which there is a dried bean hidden in the almond paste filling that is simply sealed between two layers of puff pastry.  Traditionally the cake was presented crowned with a gold paper cut-out crown and a dried bean or pea was baked in the cake. Whoever was lucky enough to find the legume in his or her piece would be crowned king or queen for the day.
Here is a nice recipe from our Three Kings Day & The Epiphany Book for you to try this Sunday.
Twelfth Night Cake Recipe: 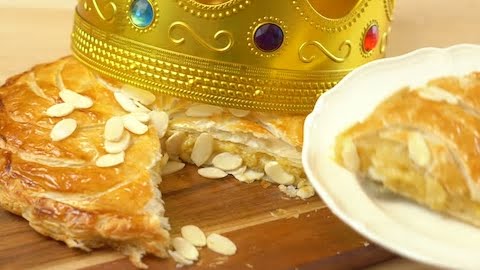 Supplies Needed:
Two eggs
1 ½ cup of sifted flour
1 cup of sugar (use half a cup of honey instead)
1 cup of sour cream
1 teaspoon of vanilla flavoring
1/2 teaspoon of lemon flavoring
1 round cake tin, (8 inches) across and (3 inch) deep
1 dried bean
A cake rack
For cream cheese icing: Mix one package of cream cheese with 1/2 stick butter, some honey and lemon juice.
Beat the eggs and sugar until light and fluffy. Add the cream and beat, then add the natural flavorings. Lightly fold in the sifted flour. Spoon the batter into the well-buttered tin. Make sure you add the bean. Bake for 40-60 minutes (check often) at 350 degrees. Enjoy!